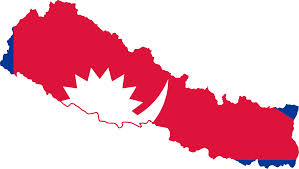 Nepal, officially the Federal Democratic Republic of Nepal, is a landlocked country in South Asia. It is located in the Himalayas and bordered to the north by the People's Republic of China, and to the south, east, and west by the Republic of India. With an area of 147,181 square kilometers (56,827 sq mi) and a population of approximately 30 million, Nepal is the world's 93rd largest country by land mass and the 41st most populous country. Kathmandu is the nation's capital and the country's largest metropolis.

Nepal has a rich geography. The mountainous north has eight of the world's ten tallest mountains, including the highest point on Earth, Mount Everest, called Sagarmatha in Nepali. It contains more than 240 peaks over 20,000 ft (6,096 m) above sea level. The fertile and humid south is heavily urbanized.

Covering an area of 147,181 sq.km, Nepal shares a border with India in the west, south and east and with the Tibetan Autonomous Region of China in the north. Kanchan Kalan in Jhapa district is the lowest point at 70m above sea level and the summit of Mt. Everest at 8,848 m is the highest. From east to west, Nepal is 800 km long and only 230 km. north to south at its widest. Within this narrow stretch of land there is incredible diversity in topography ranging from a sub-tropical climate in the Tarai (plains) to Alpine conditions in the Himalayan regions. Mountains, mid hills, valleys, lakes and plains dominate the landscape of this landlocked country. Eight of the fourteen peaks over eight thousand meters lie in Nepal including Everest, the highest in the world.Climatic conditions within Nepal vary from one place to another in accordance with the geographical features. In the north, summers are cool and winters severe, while in the south summers are sub-tropical and winters mild. The monsoon that brings rain from June through September affects most of the country except those that lie in the rain-shadow areas like Mustang which is within Nepal but a part of the Tibetan plateau.The most abundant natural resource in Nepal is water. Much of the rivers have been harnessed for hydro-power but they also play a crucial role in tourism as most of them are suitable for adventure sports like kayaking and rafting. The Himalayas are not merely a source of revenue through mountaineering and trekking, they are also mined for quartz, lignite, copper, cobalt and iron ore. The scenic beauty of the countryside attracts hordes of trekkers while there